While researching the book, I tried to find out what happened to the copies of "Birds of the West Indies" that Ian Fleming used in Jamaica. 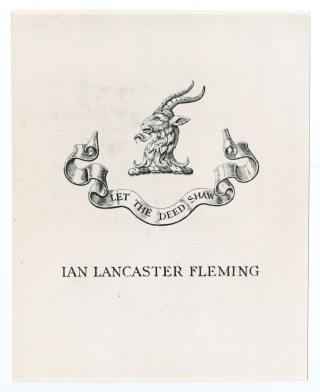 nd saw when they visited Fleming at Goldeneye, and a 1960/61 edition featured in a TV interview with Fleming (above).

I checked with Indiana University's Lilly Library, which has a collection of Fleming's rare books. Alas, none by James Bond.

They did share Ian Fleming's family crest -- which were used for his rare book collection, all housed in custom boxes.

Those boxes were emblazoned with the Clan Fleming crest, and their motto: "Let the Deed Shaw."

Further research showed that the motto was the result of this skirmish:

"The Comyns were one of the most powerful families in Scotland and the chief supporters of Edward I of England in Scotland during the early stages of the Wars of Independence.

"Robert the Bruce met John Comyn, head of the family, at Greyfriars Kirk in Dumfries in 1306. The two argued, and Bruce stabbed and killed Comyn. Robert Fleming was one of two companions to Bruce that day, and a staunch supporter of him.

"To provide proof that Comyn was dead, Fleming cut off his head in order to 'let the deed shaw,' a Fleming family motto ever since."

You can see where Ian Fleming got his flare for the dramatic. It was clearly in his blood.

Dumfries, by the way, is 14 miles from my ancestral Johnston home in Haugh of Urr.

Part of the enjoyment in writing the book was discovering (and then sharing) tidbits like this.