More about Bond and the Bahama Nuthatch A new post on the Academy of Natural Sciences blog provides an in-depth look at the Bahama Nuthatch, discovered by the real James Bond in 1931.

The slow death spiral started with pine logging, then tourist developments, followed by the explosion of cats,starlings and house sparrows. Scientists believe climate change and a series of weather catastrophes in the last few decades have finally finished it off. 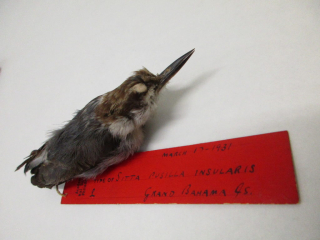 The Bahama nuthatch collected in 1931, now in the Academy’s Ornithology Collection. For size perspective, the red label attached to the specimen measures ¾ inch wide and 3 inches long. Photo by Matt Halley/ANS, starlings and house sparrows. Scientists believe climate change and a series of weather catastrophes in the last few decades have finally finished it off.

The Bahama Nuthatch, a tiny, critically endangered bird found only on Grand Bahama Island in the Bahamas, was down to the single digits before last year’s hurricane that devastated parts of the popular Caribbean vacation destination.

The post includes a photo of the bird that Bond collected for science.

You can read the post I wrote about Bond for the Academy blog here.

You can read my blog post about the Bahama Nuthatch here. (It talks about how Bond bummed a ride on a rum runner to get to the settlement where he found the nuthatch.)

A big thank you (again) to Professor William K. Hayes for the use of his recent photo of a Bahama Nuthatch, taken jsut before the species was thought to go extinct.

Below is the page from the 1936 edition of "Birds of the West Indies" that describes the nuthatch. Note the last sentence. 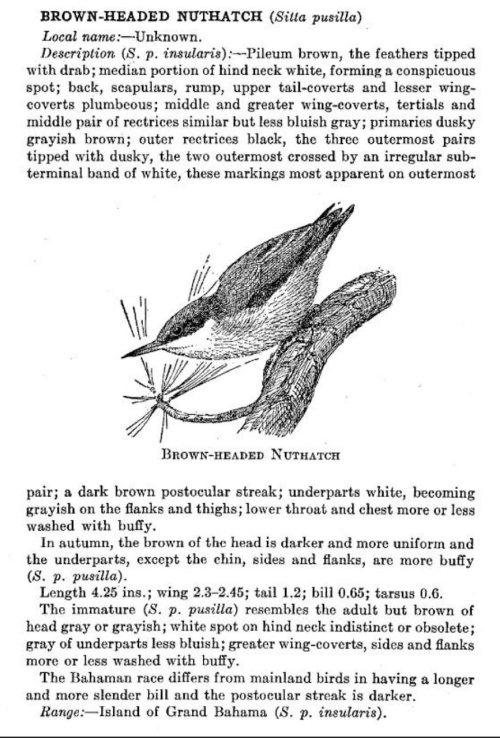