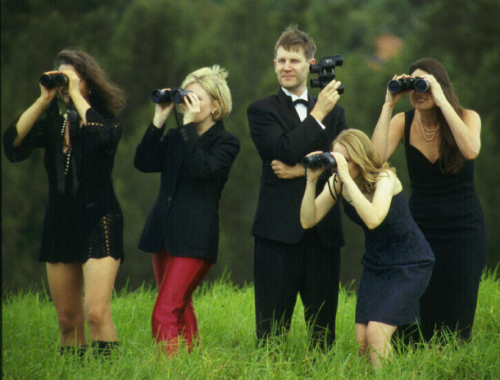 I was finally able to connect with Andrew Patrick, the birder in the tuxedo in the 2001 photo, who recently recalled:

According to Patrick, the club had a James Bond night at one of their meetings. They played the movie theme, and Patrick --  dressed in a tuxedo with field guide in hand --  explained who the real James Bond was.

"We made the James Bond-esque photo for publicity for the bird club," said Patrick. "We got on radio a number of times and had two articles in The Sydney Morning Herald. We also got some new members for the club -- which was the main purpose."

He added that the women in the photo were, from "left to right, Renée, Prue, Andrew, Heather and Aimee."

Special Cape May Festival Posts:
Monday: The Birds of 007.
Tuesday: The Bahama Parrot.