A Tale of Two Boobies 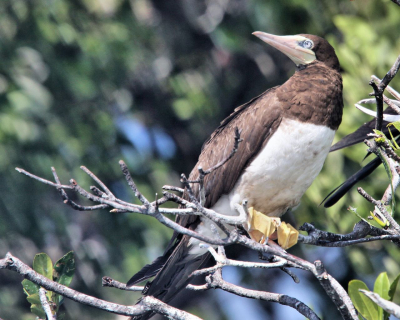 My latest column for The Record is about an extraordinary series of events that happened early this month.

A storm blew two Brown Boobies from the Caribbean clear to the tristate region. One landed in Bergen County, the other on Long Island.

The real James Bond wrote about these unusual birds in his many editions of Birds of the West Indies.

Or read it here:

By Jim Wright
Special to The Record

This is the tale of two long-distance seabirds.

Their story began earlier this month, a nasty cold front propelled the two birds all the way from their native tropics to North Jersey and Long Island -- more than 1,500 miles out of their range. They were found roughly 35 miles apart, in bad shape, on the same Saturday.

One of the seabirds was spotted on an Englewood Cliffs driveway in a most unlikely manner. An 18-month-old toddler named Eleanor heard her dog barking, looked out the window, and called to her mom, “Duck! Duck! Duck!”  It was the first-ever recorded sighting of a brown booby in Bergen County by a human of any age.

“These birds get caught up in a storm, get exhausted, and then look for the first spot of water they can land on,” says Bill Boyle, author of “Birds of New Jersey.” “Unfortunately, like loons, they sometimes mistake a rain-slicked roadway or a driveway for open water. That’s what must have happened in Englewood Cliffs.”

The other booby washed up on the south shore of Nassau County. According to Bobby Horvath, director of Wildlife In Need Of Rescue and Rehabilitation, the bird was dehydrated and covered in sand after a roiling surf rolled it onto the beach. The bird was thought to be only the second booby ever reported on Long Island.

They are most common in the open sea and coastal waters of the Caribbean. Blue-footed boobies, their better-known cousins, are tourist-pleasers in the Galapagos, where they waddle about, seemingly oblivious to humans.

Boobies are said to have gotten their name from 16th-century Spanish sailors.  When the unsuspecting birds landed on the masts of ships, the crew captured and ate them. The sailors called the birds bobo --  Spanish slang for “foolish” --  and the name evolved.

Alas, our story’s ending is only half-happy.

After more than a week of rest and a steady diet of small fish, the Long Island booby was returned to the Atlantic near where it was found.

“Hopefully, its GPS kicks in and it makes it way back south,”  Horvath says.

In contrast, despite the best efforts of several avian rescue groups, the Bergen booby died at a Delaware center that specializes in seabird rehabilitation.

“It was about half the weight it should have been,” explains Lisa Smith, executive director of Tri-State Bird Rescue & Research, Inc. “Bloodwork revealed profound anemia and significant systemic infection.”

Some readers may be wondering,  Why go to such measures to rescue a wild bird?

Smith provides one answer. “I have heard of people swerving to intentionally hit Canada geese or gulls that are in the road,” she says. “And I know that people will drive 100 miles or more to give an injured bird the chance to fly free again in the wild.

“I can only guess at people’s motivations, but I am deeply grateful to anyone who tries to restore to nature what belongs in nature. We take so much away from our environment that it gives me hope that some will go to great lengths to restore even a small piece of it.”

The Bird-watcher column appears every other Thursday. Email Jim at celeryfarm@gmail.com.

Note: I had a very tight word count for the column, so I could not mention all the unsung efforts to save the North Jersey Brown Booby by Bergen County Animal Control, the Franklin Lakes Animal Hospital, The Raptor Trust and all their wonderful professionals and volunteers.  I do so here. (Thank you, all!)

The photo, by Kevin Watson, was taken on a trip we took to Belize a decade or so ago. (Thanks, Kevin!)