About that Bond Bird in the Yale Art Gallery ... 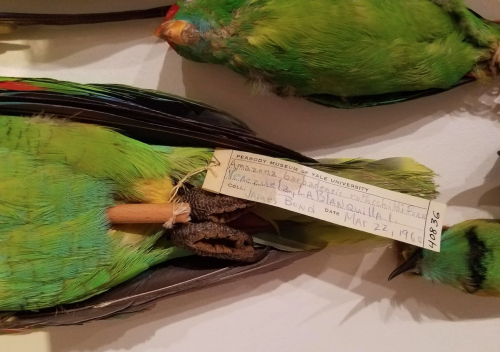 As he studied one of the works closely (it's also on the cover of Prosek's new book, photo right), he noticed 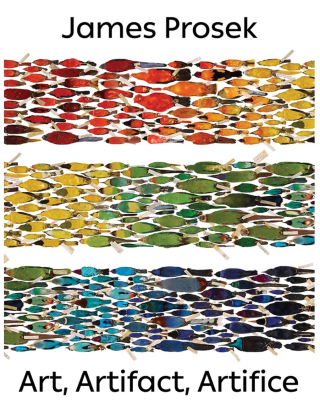 that one of the parrots -- from Yale's own Peabody Museum of Natural History -- had been collected by the real James Bond on an island off Venezuela more than 60 years ago (photo above).

How did Bond's bird skin of a Yellow-shouldered Amazon Parrot (Amazona barbadensis) end up in the Peabody, and then the Yale Art Gallery?

It's a fascinating story.

In 1960, Bond went on an expedition to Venezuela with Dillon Ripley, a long-time friend and fellow ornithologist who was the head of the Peabody Museum at the time.

(Did I mention that Ripley had been a U.S. spy during World War II?)

The parrot was collected on the Venezuelan island of La Blanquilla in the southeast Caribbean.

Bond's wife, Mary Wickham Bond, wrote a book that mentions the expedition. In Far Afield in the Caribbean, she asks her husband what birds he hopes to collect on La Blanquilla. 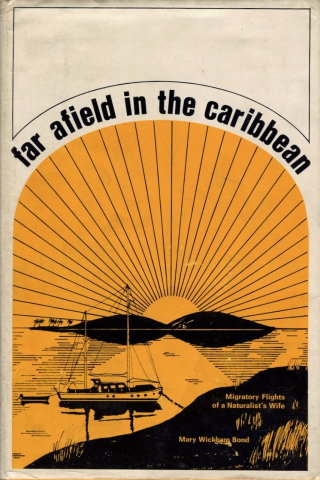 His reply: "I'm not sure what else Dillon is after, but we both want parrots."

After searching all day, they came up empty. Bond met up with the rest of the group on a beach in the late afternoon.

Mary Bond picks up the story:

"The words were scarcely out of his mouth when all at once a large flock of parrots, chattering noisily, flew into our stand of palms! Dillon heard them and came thrashing out of the water, tearing off his snorkel.

"But Jim had not yet put down his gun and approached a tree standing apart from the others. He shot twice ...

"So they got their Blanquilla parrots after all, one for the Peabody Museum, one for the Academy [of Natural Science]’s collection."

And now one of those Yellow-shouldered Amazon Parrots is on the wall at the Yale Museum of Art, part of a work of art that encompasses a rainbow of birds that once lived continents apart and even centuries apart.

Each of the birds in Prosek's work of art has a similar story  -- maybe not this detailed, but a story nonetheless.

In fact, bird skins now provide researchers with all sorts of information, but that's for another post.

You can read more about Prosek's wonderful and thought-provoking exhibition here. Both Bond and Ripley would have approved, no doubt.

Posted by Jim Wright at 11:32 AM in Academy of Natural Sciences, Threatened and Endangered | Permalink | Comments (1)