Home Archives Profile Subscribe About
About that Bond Bird in the Yale Art Gallery ...
My Book Interview with James Bond Australia

When James Bond Went to Russia 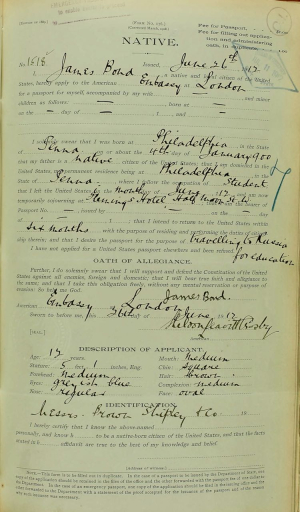 During my research, I came across one of James Bond's passport applications. He wanted to travel from England to Russia for six months.

When he applied for the passport, he was staying at Flemings Hotel.

Before anyone thinks this was a top-secret mission, consider that the year was 1912, that Bond was age 12 at the time, and that he was traveling with his father and brother.

(James Bond's mother had died tragically two months earlier, at the age of 41.)

The address of Flemings Hotel:  Half Moon Street. The hotel is now known as Flemings Mayfair, billed as "a truly luxurious experience in the heart of London" and "one of the most iconic boutique hotels in Mayfair."

It was likely swank back in the day as well.