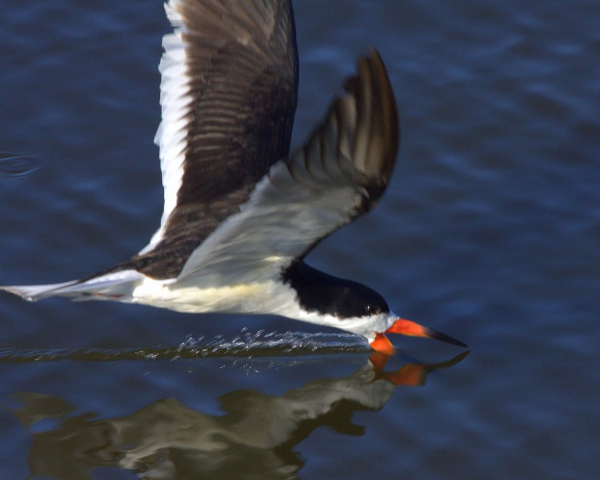 My birding column in The Record today is about one of my favorite shorebirds, the Black Skimmer.

James Bond wrote about them in the first edition of Birds of the West Indies, including a West Indies name for the bird -- Pico de Tijero, which translates loosely as "Scissor Beak."

By the way, did you realize how narrow a Black Skimmer's bill is? Check out a photo I happened to take a while back: 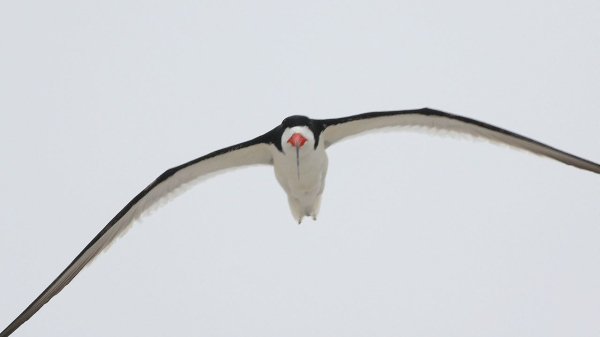 Here is Bond's Black Skimmer writeup in the first edition of Birds of the West Indies: 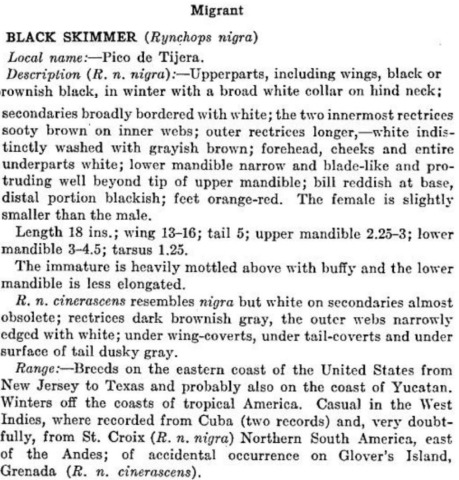 Special to The Record

They just might be the most awesome shorebirds on the planet. Sure, oystercatchers look funky, and young piping plovers are rare and cute. But when it comes to engineering marvels, you can’t beat black skimmers.

If you’re lucky, you might see them by the dozens these days on the beach at Cape May or other spots along the shore, or you might see one or two zipping above the tidal impoundments in the Meadowlands.

Once you set eyes on one, you won’t forget it.

Sitting on a beach or dock, this herring-gull-sized shorebird looks like it’s posing in front of a funny mirror at a penny arcade.

The skimmer has a bright-red and black ultra-thin bill that’s way too big and long for the rest of it. It’s the closest thing to a toucan you’ll see this side of a Fruit Loops box.  The rest of the skimmer --  from its sleek black-winged body to its short red legs -- is low-slung.

“I’ve always loved black skimmers,” says Terry Doss, director of natural resources for the N.J. Sports and  Exposition Authority. “They just stood out from the other shorebirds. I would see them when I went kayaking early in the morning, silently skimming over the water.”

That’s right -- they ain’t called skimmers for nothing. They fly so low that their lower bill touches the water and scoops up fish. The world’s three species of skimmers are the only birds that do that.

“Their striking colors caught my eye at first,” Doss says. “But upon closer look, it was their unique bill – the lower mandible is longer than the upper mandible. This allows them to skim the water’s surface in search of food.”

Doss has seen black skimmers in action alone in or in pairs in the Anderson Marsh, just off the Hackensack River in Secaucus and Harrier Meadow in Lyndhurst, and says they’ve been elsewhere along the river this season.

“They’re highly social, roosting and breeding in colonies,” Doss says. “But when they feed, I’ve only observed one or two at a time.”

According to Doss, black skimmers nest in the Garden State over the summer, but primarily along the Atlantic Coast. She would like them to breed here as well.

“The NJSEA would like to create sandy shoreline and dune habitat in appropriate areas, with the hope of providing potential nesting habitat for diamondback terrapins and skimmers,” she says. “So if anyone has large amounts of clean sand that they can provide, let us know.”

If you’re lucky you might see one between now and late summer or early fall, when they typically leave New Jersey and follow the coast down to Florida and the Caribbean.

“I always enjoyed seeing them at dawn when everything is quiet and they freely skim across the water,” says Doss. “But dusk is another good time.”

The Bird-watcher column appears every other Thursday. Email Jim at celeryfarm@gmail.com.