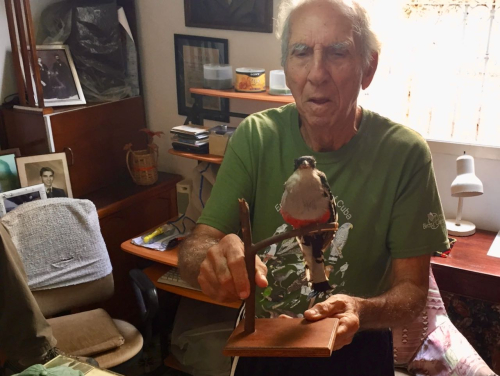 One of the highlights of my trip to Cuba in 2016 was meeting the great ornithologist Orlando Garrido.

I met him as part of a group of birders who visited  Cuba with the Caribbean Conservation Trust.

The biggest reason for my trip was to meet (and later interview) Orlando for my book about ornithologist James Bond of the Academy of Natural Sciences in Philadelphia.

All of us went into Orlando's house in Havana and crowded into his office, where he brought out the taxidermied versions of Cuba's endemic birds and talked about each one.

Looking back at the photos now, I am tickled that I got a photo of Orlando holding a Cuban Trogon (above), the national bird. 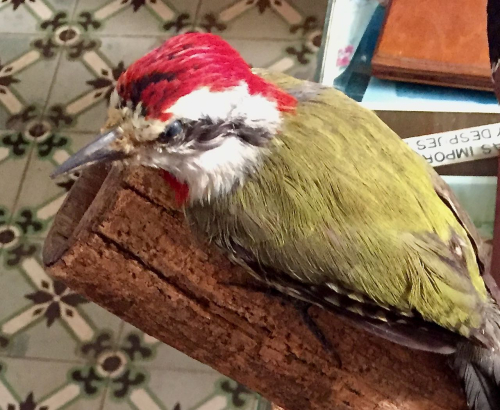 I also realized that I had taken a photo of a Cuban Green Woodpecker  --  the bird whose head adorns the Birdman on the cover of my book. Who knew?

Since I had a tight word count, I had to cut much of the account of that visit, I share that account here as I say happy birthday to a great ornithologist and terrific guy...

MEETING ORLANDO
Our group met with Orlando in his home in Havana on the first day of our visit, on the drive from the antiquated one-story airport.

The twenty-passenger tour bus parked around the corner from Calle 60 and Garrido's house, a two-story white stucco house with round-top windows and elaborate metalwork.

THE BOND CONNECTION
As a goodwill gesture, I  brought Orlando copies of his correspondence with Bond, which I had found in a box of manila folders in the ANSP archives.

The first typewritten letter, from Orlando in Havana to Bond in Philadelphia, was dated February 2, 1962. It begins: “It is pleasure to address you despite that I have not met you, but through your books I have done it.”

Orlando writes that Cuba is forming the Cuban Museum of  Natural History, and he is in charge of the ornithology department. He wants to buy a copy of the third edition of Birds of the West Indies, and he wants Bond’s advice on other books for the fledgling library.  He also says that he is in charge of the collecting and hunting staff because he wants to create a collection of Cuban bird skins. He concludes: “I do hope the political situation should not interfere in any naturalistic friendship.”

In a typewritten letter dated March 13, Bond gives him the information on purchasing his book (heaven forbid the perennially penny-pinching Bond should send him a free copy) and adds: “It seems to me with the wealth of Cuban material in your country it would not be necessary to go to the trouble and expense of starting what would virtually be a new collection. When I was on the island I examined over 10,000 bird skins in various collections. It would seem to be that many of these could be obtained for your museum.”

Bond then writes ruefully that he has spent much time in Cuba and regrets he “cannot return there at the present time.”

I confess to a bit of a selfish motive for sharing the letters with Orlando. I thought they would establish my bona fides as a researcher and perhaps jog his memory when I later interviewed him -- although it turned out that Orlando hardly needed to have his memory jogged.

He knew the contents of the letters well, and his encyclopedic mind zipped from topic to topic like a Bee Hummingbird at a flower show.

A SHOW-AND-TELL
Our group stood in the master ornithologist’s tiny home office, listening intently as he presented an elaborate show-and-tell, talking about Cuba’s endemic species and hauling out a taxidermied specimen of each for all to see while he discussed their attributes and range.

In every case, as far as I could tell, Orlando had collected all of the birds himself over the past 50 years or so, and he talked about each one almost fatherly -- from a small Bare-legged Owl to an elegant Cuban Trogon, with its feathers of red, white and blue and elaborate scalloped tail. These were more than just birds he had stuffed, or trophy birds. They were prized symbols of Cuba’s incredible bird life.

On the wall was a faded portrait of his idol, the German-born Juan Gundlach, the father of Cuban ornithology and author of the first major work on the birds of Cuba, Ornitología Cubana. More than sixty species were named for him, including Gundlach's Hawk (Accipiter gundlachi).

Curiously, with his aquiline nose, and thin face, and receding hairline, Garrido bore a strong-enough resemblance to Gundlach that he could have passed for a grandson, though no such blood connection is known to exist. 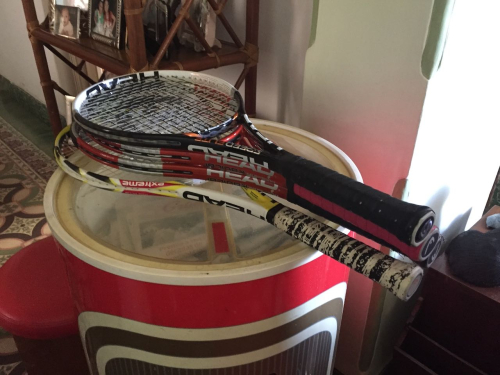 ORLANDO THE TENNIS STAR
Also lining the room were photos, medals and trophies that reflected Garrido’s other passion -- tennis.

Garrido was an international tennis star around mid-century, playing in Davis Cup matches from 1949 to 1959, competing at Wimbledon and the U.S. Open, and winning several international tournaments, from the Swiss Open to the Portuguese Open.

By the entrance to Garrido’s office, four brightly painted metal Head tennis rackets sat, as if on standby for the next match.

On at least one occasion far earlier in Garrido’s career, tennis and natural intersected at a most untimely moment.

Garrido once stopped play in a 1959 Davis Cup match in Canada to rescue an unusual beetle. He was about to serve when he saw a large beetle on the grass court in front of him.

Orlando walked to the sidelines, found an empty tennis-ball can, put the beetle inside, secured the lid, and resumed play.

(A big thanks to BirdsCaribbean for sharing the news of Orlando's 90th birthday. Happy birthday, Orlando!) 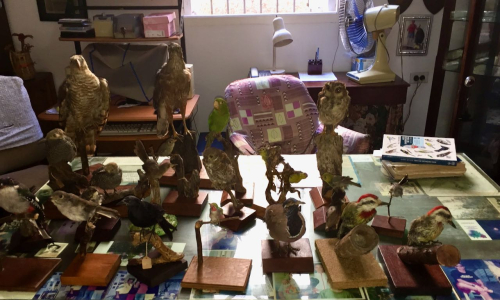 Posted by Jim Wright at 09:43 AM in Academy of Natural Sciences, Birds Caribbean, Birds of the West Indies, Cuba | Permalink | Comments (3)

I had the great pleasure of being chaperoned around Cuba for about a month by Orlando and Miguel Jaume in 1967 when I was a grad student at the MCZ studying Anolis. At that time it was ridiculosly hard to get into Cuba (legally) from the US but some- how, I received both US State Dept. and Cuban government permission. We've seen each other a couple of times in the past 55 years, but I have lost contact.
So...Belated Happy Birthday...and how can I write or e-mail to my inspirational naturalist friend?
George Gorman (ggorman1941@gmail.com)

I recall being in San Juan PR for Garrido's 75th birthday. Orlando used to spend several weeks each year in Puerto Rico with a handful of former Cuban scientists he had worked with at the National Museum of Natural History in Havana. These other Cubans had eventually defected and were living and working in PR. Orlando of course would always return to Cuba, and consequently would get consent from both governments to make the trip to PR annually. The Cubans were being supported by Victor Gonzalez, a Yale School of Forestry alum who has funded several projects over the years including the Garrido/Kirkconnell Field Guide to the Birds of Cuba published by Cornell University Press in 2000. Interestingly, Orlando was not working on a project concerning birds or anoles (he has described several Cuban species), but insects. As it turns out, Garrido had compiled what was described to me at the time as the largest private insect collection in the West Indies.

Happy Bird-thday Orlando. I miss my Cuban Grandfather and Mentor!