Straight Talk on How 007 Got His Name

It seems like every month or so, another news report claims to come across another "real James Bond"  -- either the inspiration for James Bond or the source of the fictional character's name.

I'm sure Fleming drew on several people for his fictional character, but when it comes to the name itself, anyone who says that it was anyone other than the ornithologist from Philadelphia's Academy of Natural Sciences is off the mark.

My favorite theory, which was based on speculation, is that Fleming read an Agatha Christie short story called "The Raja's Emerald," noted the name of the main character, and simply appropriated it.

It's doubtful that Fleming 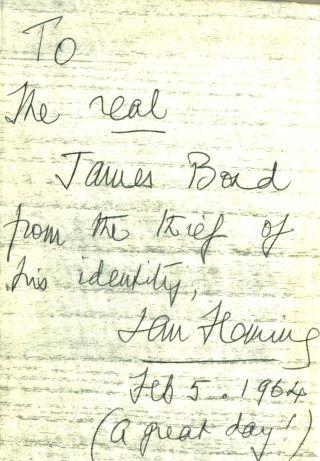 would use the name of a protagonist from another work of fiction. It's far more likely that this is just one of life's coincidences, especially considering that...

In researching The Real James Bond, I came across several accounts, in Fleming's own words, of how he chose "James Bond" for 007's name.

All of them are quite similar in general and quite specific in one regard. Fleming says he got the name from the cover of "Birds of the West Indies."   The author, James Bond.

What's more, when the real Bond visited Fleming at Goldeneye in 1964, 007's creator gave him a copy of You Only Live Twice and inscribed it "To the real James Bond, from the thief of his identity."

Not long after that visit, the real Bond told a newspaper interviewer Fleming used the 1936 first edition for his inspiration.

Reports that Fleming used the later 1947 edition, on the other hand,  are based purely on supposition.

The Real James Bond at the AMNH 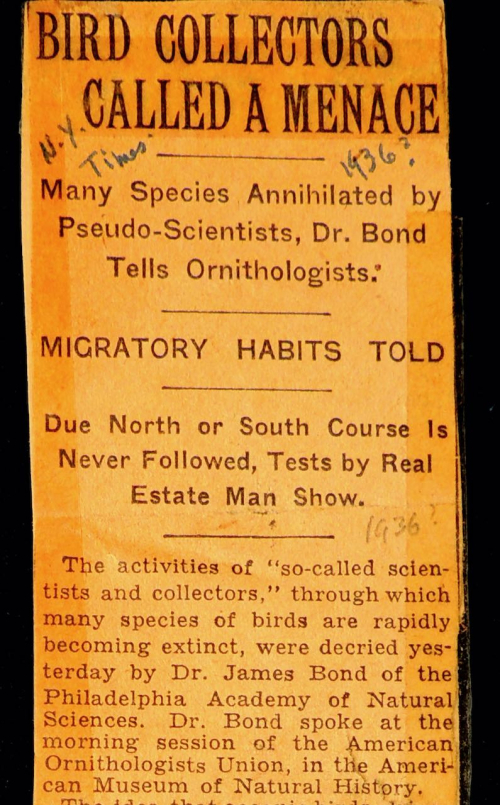 In my Zoom talk for the Linnaean Society earlier this week, I noted that the ornithologist James Bond also spoke to the group  -- at the American Museum of Natural History in NYC on April 11, 1944.

Turns out that Bond visited spoke at the AMNH earlier -- I just didn't know the date. Than 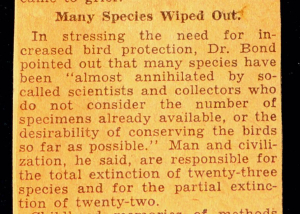 ks to a newspapers.com search yesterday, I think I found the answer...

Early into my research for the book, I came across a clipping in a scrapbook  (in the James and Mary Bond archive at the Free Library of Philadelphia, as I recall) that reported on a Bond talk at the American Museum of Natural History.

I loved the sepia-toned clipping because it shows that Bond was a conservationist way back in the 1930s.

I now believe it was neither. I think it may have been from the Philadelphia Bulletin, though I can't say for sure.

In my recent newspapers.com search, I came across an article 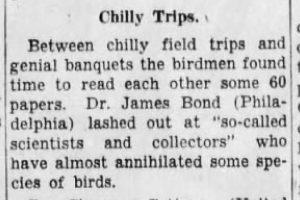 The article was about a gathering of 400 ornithologists at the AMNH for the Golden Jubilee of the American Ornithologists' Union.

And there was a paragraph about "Dr." James Bond lashing out against collectors and so-called scientists for killing so many birds.

The same pitch at the same place, with the same misidentification of Bond as a doctor of ornithology.

By the way, Bond has been criticized by some ornithologists for not collecting enough samples of various species for research.

Posted by Jim Wright at 08:50 AM in Academy of Natural Sciences, Free Library of Philadelphia, Philadelphia | Permalink | Comments (0)

A big thank you to the Linnaean Society for hosting my talk about the real James Bond, a spy or two, and three birds he collected for the American Museum of Natural History.

The Linnaean Society recorded the talk -- which featured a discussion with BirdsCaribbean's Joseph Wunderle about West Indies conservation. You can click on the YouTube video of the talk above.

To order a signed copy of my book, The Real James Bond, email me here.

Proceeds from these sales will go to BirdsCaribbean in honor of the real James Bond. 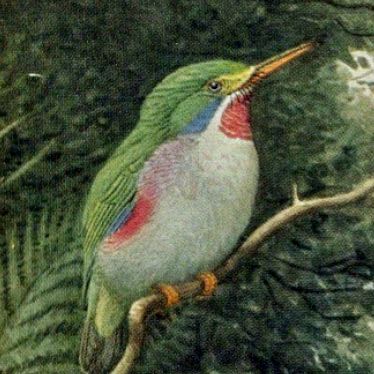 Don't miss my free Zoom talk for the Linnaean Society of New York City on Tuesday, Feb. 9, at 7 p.m.

The talk will feature three rare birds that the real James Bond collected for science in the West Indies (including one now feared extinct) and an ornithologist/spy or two, 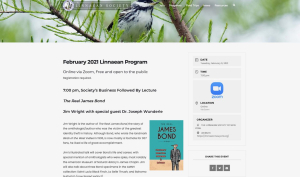 After the talk, I'll chat with Dr. Joseph Wunderle of BirdsCaribbean, who has some amazing stories to tell.

(He once had lunch with Bond, and it changed his life.)

The details on how to register are here.

(That's the Cuban Tody from the cover of the 1936 Birds of the Indies above.) 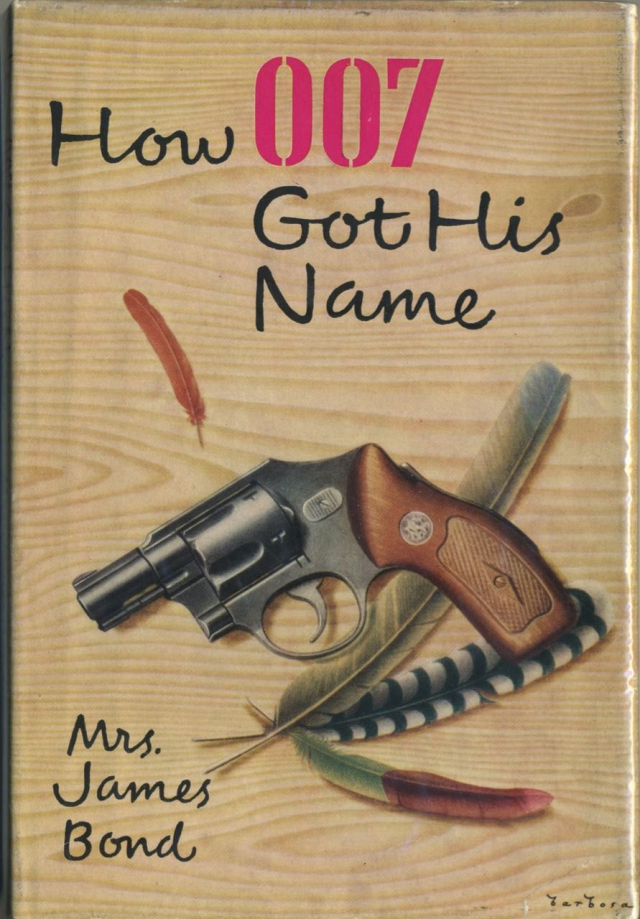 On Monday I asked:

In advance of my free Zoom talk next week (Feb. 9 at 7 p.m.) for the Linnaean Society, can you identify the feathers on this rare book by Mary Wickham Bond?

The answer: According to world-renowned feather expert Pepper Trail:

The feathers on the James Bond book are fanciful. Perhaps from unknown species in Goldfinger's diabolical aviary, but not from birds known to science.

You can learn more about my talk and register here.

My special guest is noted ornithologist Joseph Wunderle of BirdsCaribbean.

Can You I.D. These Book Feathers?

In advance of my free Zoom talk next week (Feb. 9 at 7 p.m.) for the Linnaean Society, can you identify the feathers on this rare book by Mary Wickham Bond?

You can learn more about the talk and register here.

My special guest is noted, ornithologist Joseph Wunderle of BirdsCaribbean.

Posted by Jim Wright at 07:42 AM in About the Book, Birds Caribbean, Mary Wickham Bond | Permalink | Comments (0)