Home Archives Profile Subscribe About
My 10,000 Birds Post: A Parrot on the Brink
Save the Date: Acadia Birding Festival 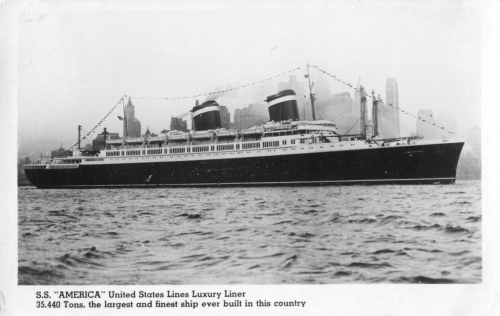 The Real James Bond typically traveled by mail ship when he went to the Caribbean to do his research for the Academy of Natural Sciences in Philadelphia.

Imagine my surprise when I discovered he sailed on the luxurious S.S. America to the West Indies  on May 5, 1941 --80 years ago today.

What was he doing on this high-end cruise ship? Did it involve Nazi spies?

I guess you should read my book. (This photo was likely taken early in the ship's career).

By the time Bond sailed on her, her sides had huge U.S. flags painted, along with AMERICA and UNITED STATES LINES in huge letters on her sides to deter U-boats.

Shortly after the cruise, the luxury liner was converted into a troopship and renamed the U.S.S. West Point.