During my book research and work I've done for blog posts 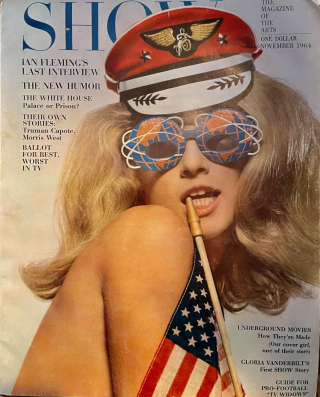 and articles, I keep coming across two types of information:

That's why I try to find as many interviews as I can with Ian Fleming or Jim Bond, which provide information straight from the author's mouth.

To that end, I recently tracked down an interview that Fleming did with American writer Roy Newquist.

It appeared in the November 1964 issue of Show magazine.

The blurb on the cover proclaims:

I'll have to look at all the other Fleming interviews I've collected, but I think this is the first in which he categorically said that took the ornithologist's name without permission. (The "Trevor Carr" part seemed new as well.) 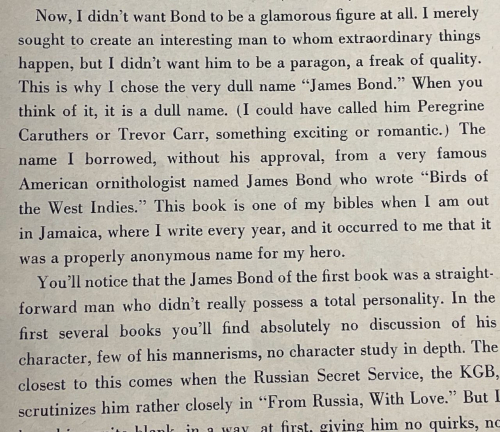 It may not seem like a big deal, but I can't tell you how many times I've read articles and books that say Fleming and Bond were buddies or they met on a plane, and that Fleming got Bond's permission to use his name. I get emails repeating the same hooey.

My favorite is a 1965 letter to the editor in the Atlanta Constitution that trafficked in at least two falsehoods in short order. 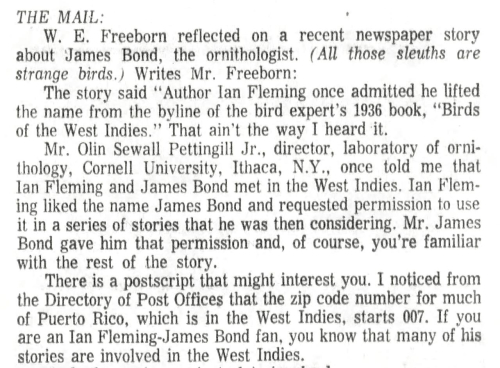 For the record, Fleming never had Bond's advance permission to use his name. Fleming says as much in that interview with Show magazine.

Fleming took appropriated the name in 1952. And contrary to the letter writer's implication, the two didn't meet until 1964.

While it is true that many postal codes in Puerto Rico begin with "007," American postal codes weren't used until the mid-1960s.