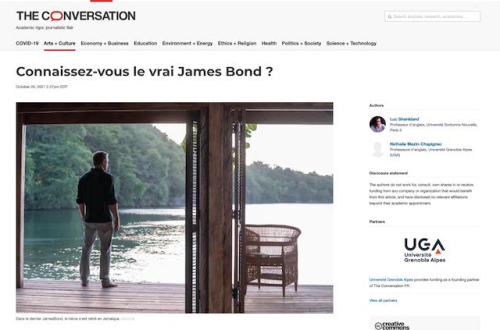 I came across a fascinating article about 007, the real Bond, spies and more on The Conversation website.

The trouble is that this version of the website is French, and the article by Luc Shankland and Nathalie Mazin-Chapignac is in French as well.

(The Conversation bills itself as "a nonprofit, independent news organization dedicated to unlocking the knowledge of experts for the public good. We publish trustworthy and informative articles written by academic experts for the general public and edited by our team of journalists.")

I especially like the part about my book being an "extremely well-documented and illustrated biography."

You can read it here:

According to Google Translate; the article says in part:

Between Bond and Fleming, a real bond

Born in the United States in 1900, James Bond attended the prestigious private school in Harrow during World War I, receiving the emphasis and training that distinguished the British elite at a time when British nationalism was at its height. Too young nonetheless to engage on the front lines, Bond nevertheless stood out in Harrow as one of the "most illustrious old boys".

Bond continued his graduate studies at Cambridge, at Trinity College, the alma mater of the famous spies known as Cambridge where he frequented the very closed circle of the members of the Pitt Club, of which Guy Burgess and Anthony Blunt, two of the five of Cambridge belong. While James Bond was never on any Cambridge spy list, following Burgess and Maclean's defection to Moscow in 1952, he ended up on the red list of Cambridge old boys suspected by the CIA.

This is precisely where Ian Fleming flies to his Jamaican residence, Goldeneye - named after a bird and the code name of an operation led by Ian Fleming during World War II. In three weeks, he wrote his first novel Casino Royale whose protagonist is a secret agent named Bond, James Bond.

"Why, James Bond?" Fleming asks again in an interview. “James Bond appeared to me in my library, on the cover of Birds of the West Indies, which is 'my bible' in Jamaica."

Ten years and 12 novels and 9 short stories later, James Bond has become the most famous secret agent on the planet. Since then, the ornithologist James Bond has never been worried by the CIA again, only harassed in the middle of the night by fans of 007. Who would now dare to suspect James Bond of espionage without passing for a fanatic who could no longer discern between fiction and reality?

The last to engage in this perilous exercise was Jim Wright in his book The Real James Bond: A true story of identity theft, avian intrigue, and Ian Fleming published by Schiffer in 2020. In this extremely well-documented and illustrated biography on the real James Bond, Wright nevertheless dares to ask the question of whether James Bond was an American spy. Wright concludes not.

But isn't the question rather whether James Bond would be on Her Majesty's Secret Service? Opening Birds of the West Indies published in Britain by Riverside Press Cambridge, the only work James Bond has written with over a hundred Caribbean expeditions to his credit but without any new bird specimens discovered, one is entitled to wonder what he spent his time  with a pair of binoculars (007) and a license to kill ... birds?

Knowing that "bird" in English military jargon means missile, that James Bond knew every beach, cove and bay of pigs, wouldn't it be possible to read the field guide to the West Indies full of maps and topographical descriptions like a guide or military intelligence source, depending on intent.

This guide, published in Cambridge, was written for a British and American readership with this dedication: "To my many friends in the West Indies, in appreciation of their hospitality and assistance." "Friends" being a keyword that reminds us of the famous article by E.M. Forster published in 1939, to which the Cambridge spies also often referred, and in which we can read: "If I had to choose between betraying my country and betraying my friend, I hope I should have the guts to betray my country."

From this perspective, James Bond's homeland might not be the United States or even the United Kingdom, but a homeland of friends who have found their refuge in Jamaica. Ian Fleming lived his dream there, surrounded by a group of friends named Noël Coward, Cecil Beaton, William Plomer, Truman Capote… all gay, like the Cambridge spies, at a time when homosexuality was still a crime in Britain. Was James Bond part of that inner circle of close friends? Was he one of them?

The biographies of Mary Bond and the photo of Fleming and Bond, as well as the dedication that Ian Fleming leaves to James Bond in his book You Only Live Twice: “To the real James Bond from the thief of his identity, Ian Fleming, Feb 5. 1964 (A great day!)" suggest that yes. In Fleming's novel Dr. No and the film with Pierce Brosnan, Die Another Day, James Bond introduces himself as an ornithologist. In the latest No Time to Die installment, Bond / Craig retires at Goldeneye, Fleming’s former landmark. The circle is complete.

Interesting theories, but I believe the authors sell Bond's ornithological contributions short, and there is a lot of speculation that seems a bit "out there."

An enjoyable and thought-provoking read nonetheless. I hope the magazine posts the article on its English-language website.